Do what is right, not what is easy, nor what is popular.

November 6, 2022 by Brian Weiner No Comments 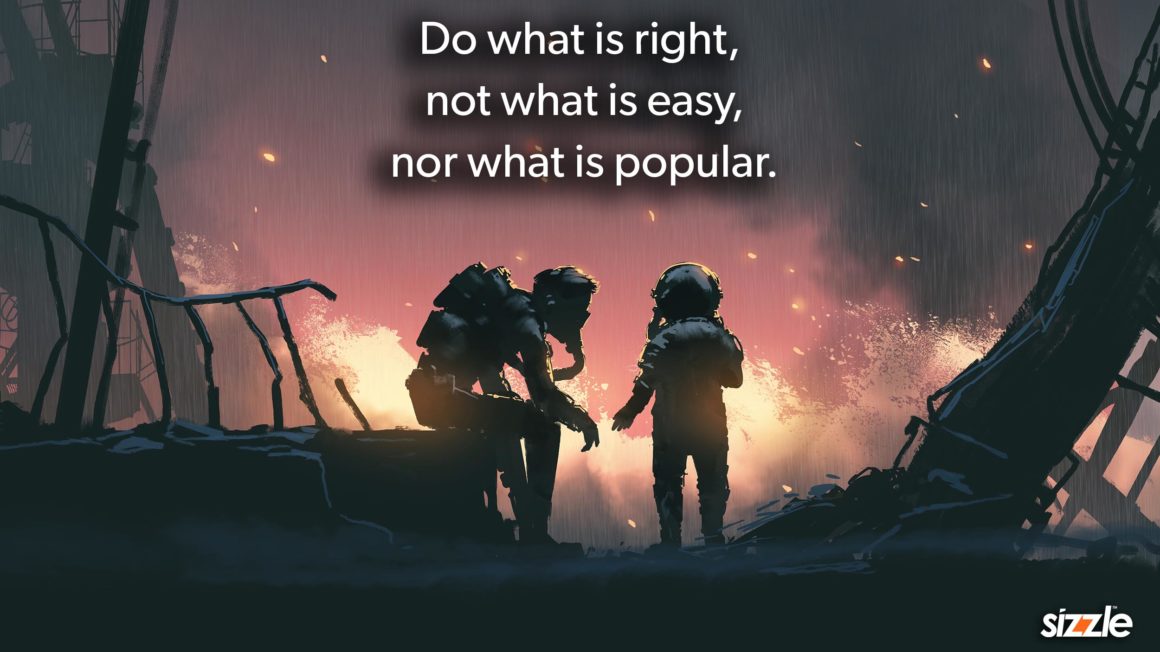 Do what is right, not what is easy, nor what is popular.

More often than not, this is a lesson that is learned under numerous circumstances, when we are children. It is most often taught to us by our parents, assuming our parents had an ethical and moral responsibility in their choice of upbringing methodologies…

Peer pressure is often times one of the single biggest motivators to lure us out of what we know to be appropriate, continuously tempting us with pathways of alternate morality. These  pathways are more often than not, choices that we would not normally make, were we alone in a vacuum. We find ourselves dipping into a rationalization a kin to, “well if everybody else is doing it, it must be OK,” all the while knowing, that we are clearly doing something that is out of our normal code of ethics.

As such, we are prone to learn more about the essence of a person, by the choices that they make when they believe that no one else will ever know.

I would presume that almost everyone can look back at their childhood and recognize some of the choices that they made as kids, were clearly out of bounds, and consequently they have matured as they have grown into adults, leaving those kinds of behaviors in the rearview mirror. How interesting then, to find ourselves as parents suddenly having to be the arbiter of justice when our children opt to behave outside of a general code of ethics.

In that parental moment, we can simultaneously remember a moment where we got away with something similar, and yet, as a responsible parent, it is incumbent upon us to call out the behavior as inappropriate and reprimand our children as required.

In the end, I would presume a majority of us are behaving accordingly because we know that if we do not stop this kind of behavior dead in its tracks, it will proliferate into much worse choices, many of which society and the law will not tolerate.

As a nation, we are witnessing some of the most extreme examples of such behavior threatening to completely undermine the value system and laws of our country. We find ourselves biting our tongue and refraining from engaging in any political discourse, for fear that to opt to hold out truth, moral values and ethics will only be met with pre-created tribal discourse that ignore the essence and only serve to justify the behaviors that are in question.

In the course of trying to deflect the pre-written tribal response to any of these inappropriate and illegal choices, we might opt to drop the larger topic and ask the opposite party how they might feel if their child did something that was parallel to the behavior that they are readily defending. In most cases, even this choice of discourse will not yield a fresh perspective in the receiving party because they are already focused on doing what is popular in their circles.

At a certain point, we are left with very little ammunition to persuade anyone about anything that they have become emboldened to believe, because for them to take a step backwards and view that which they are defending through a filter of neutrality, is surprisingly too much to ask of the other party.

History repeats itself, not because those of us who study history are not cognizant of this happening, but because a majority of people have not been raised to understand that history does repeat itself and that we as a human specie are the most highly receptive conduit of such person to person persuasion.

I believe that each of us hold a moral obligation to society at large to remain responsible and ethical on all fronts, especially in the business world. It may not always be the easiest of choices, but it is most certainly the appropriate choice.

Or, as Spike Lee once said, “Do the right thing!”