Maybe I’m mistaken expecting you to fight…Or maybe I’m just crazy, I don’t know wrong from right…But while I am still living, I’ve just got this to say…It’s always up to you if you want to be that…Want to see that want to see that way…You’re coming along.

November 7, 2022 by Brian Weiner No Comments 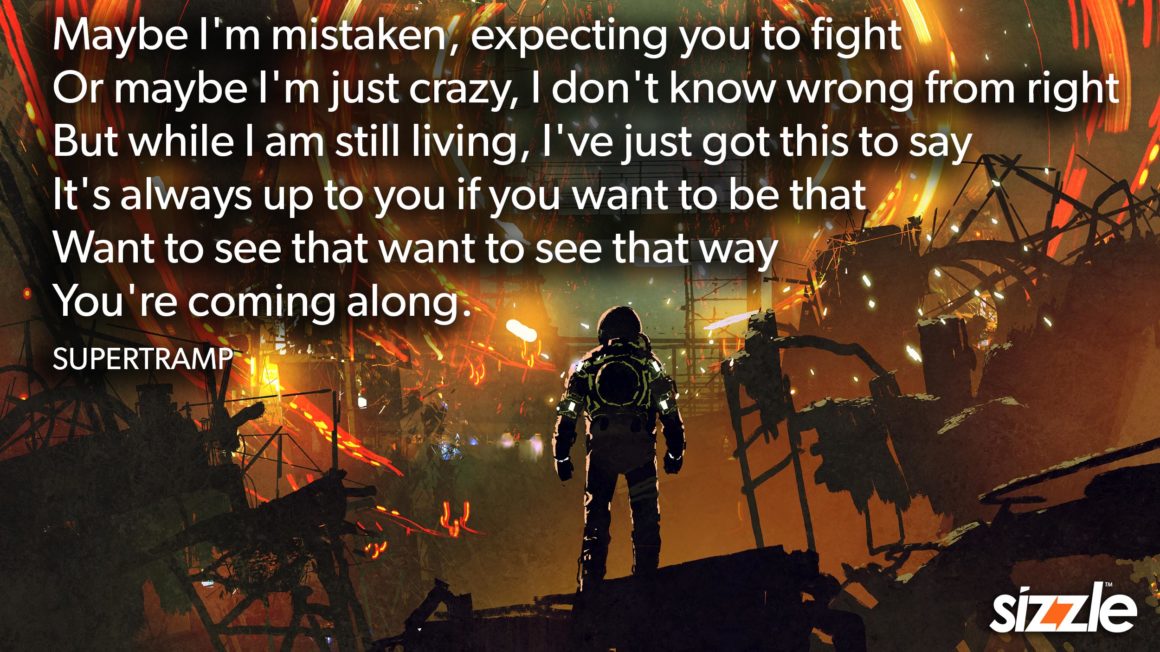 But while I am still living, I’ve just got this to say

I remember how impactful these lyrics were, when Supertramp released this album in 1974.

We were all up and coming rebels, ready to take on the system and help make the world a better place for us having walked the planet. Socially impactful music was the force behind our generation. All of the important musicians were releasing songs that spoke to our generation and awakened a sense of values and duty. The Vietnam war was only over for about 12 months when this song came out, and my fears of being drafted and sent to fight that war were only just calming down.

During that era, artists like Crosby, Stills and Nash, Neil Young, The Who, Pink Floyd, John Lennon and so many others lead the movements with highly impactful songs that still hold their ground, 50 years later. Tracks like “Ohio” made us aware of the students getting massacred for protesting at Kent State, during the Democratic Convention in Mayor Daly’s city, while The Who reminded us that without change, the new boss is the same as the old boss in “Won’t Get Fooled Again.” Pink Floyd was using animal analogies with “Dogs” and “Sheep” to show how we, as humans, are being brainwashed into accepting norms that are not normal, and John Lennon (and Yoko) gave us a vision of what the world could become with “Imagine.”

Socially impactful music could not have been more important 50 years ago, and it is desperately wanting now. Music touches the soul. It kindles spirits that almost no other medium is able to rally. It drives our inner being and gives us cause to think, to contemplate, to wonder if everything we are being spoon-fed by media is accurate, or is it serving another’s agenda?

Our generation sprang from those moments and blossomed with perspective and attitude. Some was truly beneficial, others, not so much. But such is the case with being socially outspoken about values, principles, morals, ethics and fortitude. We are coached not to intermix politics with business, especially now that our nation has divided into two highly disparate tribes and tribal culture is replacing independent thought, reason and individualistic determination.

I would argue that while the business space is not the place to be emboldened to create friction through aggressive confrontation of issues that trigger tribalistic responses, there will always be a place to promote decency, compassion, courage, determination, thoughtfulness, consideration, empathy, and love for another human being. I see posts in social media all the time that show videos that exemplify this, and I continuously support these efforts and contribute my own on a daily basis.

We are never going to make a massive, sweeping change that will convert one tribe into the other. That is completely the wrong approach. I believe it is far more important to recognize that subdividing us into two tribes that do not like one another is a divide and conquer approach being used by larger, more heinous powers. Far better to remember that we have much more in common than we have that is disparate. Better to focus on core values that mean so much to humanity, separate and apart from the tribe culture.

Which socially impactful music touches your heart and leaves you contemplating the way things could possibly be?