We all need to be mocked from time to time, lest we take ourselves too seriously. 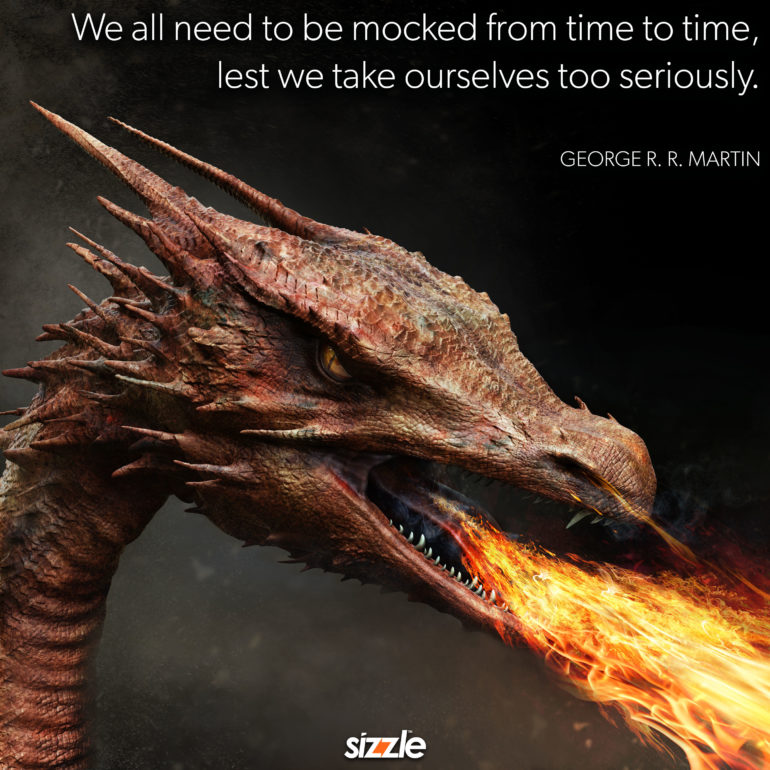 Are you good at taking some humor made at your expense, so long as the intention is not malevolent?

We all tease each other, and when it is done with warmth in the heart, teasing is a great experience for people to share a common bond. Usually, it stems from one party knowing the other so well, that they are able to take an aspect of what the other party says, does or believes and use it in a kind, teasing manner.

When one of the parties is a celebrity, as in the case of George R. R. Martin, the teasing often goes beyond the kind phase and can become merciless in the hands of the wrong party. George is an American novelist and short story writer, screenwriter, and television producer. He is the author of the series of epic fantasy novels A Song of Ice and Fire, which was adapted into the Emmy Award-winning HBO series Game of Thrones.

For all of his stellar writing, the series got ahead of his novels and the producers wrote their own ending to the series and caused quite a bit of disappointment in the fans. I think a lot of the fan anger at the ending of Game of Thrones was wrongly directed at George.

I encountered his work at an early stage of The Illusion Factory when we were asked to bid on doing the visual effects for a film entitled Nightflyers. I remember reading the script and thinking it was dreadful, gory and had no real payoff for me as an audience, but we bid the project and lost out to another VFX company. Prior to that, there was a short story he wrote called Sand Kings that I wanted to adapt into a short film in film school.

Regardless of public stature or private relationship, the ability to allow others to tease you, privately or publicly, is an art that takes maturity, self confidence and a good sense of humor to take it in stride.

And when you develop that skill, then you are able to not only laugh with others at yourself, but also able to learn about things that others find humorous and perhaps, pick up a lesson along the way.

Life is so serious… try to laugh all the way through it. Don’t take yourself too seriously. It really makes a difference.