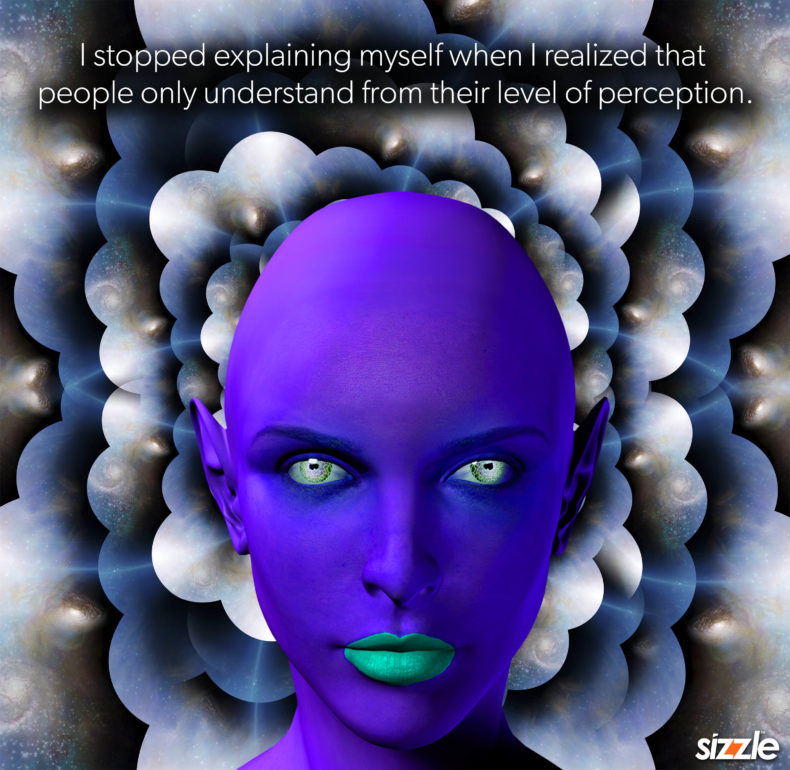 As the world continues to evolve and those of us who envision this planet as a massive collection of vibrating frequencies work to elevate the frequencies of others, I realized that to try to explain what I am doing was pointless. I had might as well be speaking in an unknown language because I could see eyes glazing over in the course of people trying to understand.

So I stopped speaking about it (for the most part) and instead, opted to share ideas that help others to vibrate at a higher frequency, whether they know or understand it, or not.

What difference does it make?

That’s the kind of question I would try to explain on a subatomic level. I would venture down the discussion of harmonic vibration and try to explain how and why things vibrating at similar frequencies correlate. But then the conversation really dropped into the abyss.

You have had these kinds of conversations yourself, but not on this topic. It might come with that toxic relative you see at family gatherings who is hell bent on seeing the world through a filter that does not match your own. You try to explain the most basic concepts, like tolerance of people who are different than you, but your explanations fall on deaf ears and in the end, you only get yourself stirred up and you have made no impact on them or their perspective whatsoever.

Does this mean that when we encounter an opposing perspective that we are better served not to engage?

The honest answer is, yes. Sometimes. It really depends on the intelligence of the other person and their desire and willingness to contemplate perspectives that are not of their own making. An intelligent person can put their feelings on hold and their opinion on hold so that they may best understand what the other party is trying to explain. At the end of the explanation, they may feel just as they did before, or not. But they were willing to have an open mind to listen and contemplate.

A majority of people are less willing, or, in the case of someone trying to explain something that is so contrary to your own understanding of reality as to infuriate your sensibilities, at which point, you just tune it out completely. I am very guilty of being such a person, regardless of any perceived intelligence I may believe I have. When I am listening to someone spewing misinformation that I know to be completely false, I do not have that open mind of which I speak. My mind closes instantly and I am instantly working to extricate myself from said discussion. What’s the point of listening to pure BS?

The world is comprised of billions of mindsets. It is a miracle that it has progressed as far as it has. The glue that holds it together is the continuous common understandings that drive humanity to ever increasing vibration at higher frequencies. With more people sharing a vision of compatibility and compassion, our specie thrives and humanity blossoms. To understand this, watch the general outrage in the world at what is happening in Ukraine. When the atrocities are broadcast into the homes of civilians around the world, and people are able to empathize with the families whose lives are being needlessly destroyed over greed, avarice and power, the vibration of the specie escalates because collectively we are sometimes like the Borg in Star Trek, we are a mindset that is a hive mentality and right now, our collective hive is being beaten with a stick, and it makes all of us uncomfortable, scared and decisively determined to find a better solution in life.

I do not think we are always wise to expend the time trying to explain to someone who will never understand. Instead, spend the same time doing things of value that elevate the world for those in your inner circle and surroundings. Those same efforts, when magnified through the lens of how many people are able do the same in their world become extensively powerful by sheer volume of effort.

If every person made it a point to make 5 people feel happier today through a genuine act of kindness, imagine what would happen on the planet. Take the absolute… every person on the planet making 5 feel better and do the math. In this simple example, I am not bogging people down with numbers and theorems, I am not talking about vibration and escalation of frequencies, because no one cares save for a select few… But everyone can imagine what would happen if everyone made five others happier that day, how that happiness would spread around the world. Just like everyone can envision how gifts for everyone at Christmas makes everyone happy.

When your message is too esoteric, dumb it down, change the tune, but never lose your focus on working to make a good point known. Just adjust to your audience until they are able to resonate with your thoughts.