I have learned that there is more power in a good strong hug than in a thousand meaningful words. 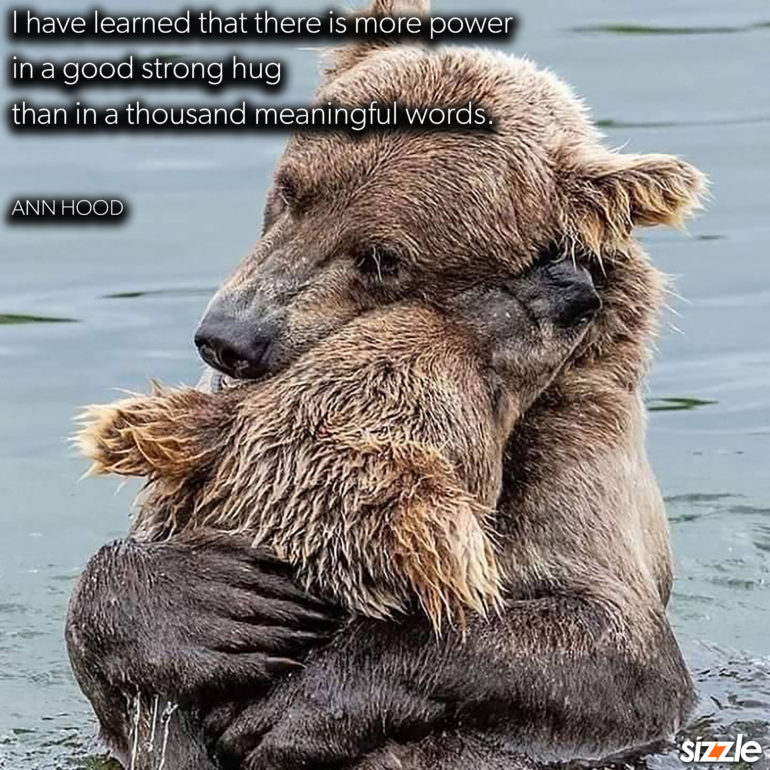 Why is a hug so powerful? It is literally wrapping your arms around somebody or some thing and clenching for a brief period of time. So why is that so communicative?

Hugs are pervasive throughout the entire animal kingdom. The expressed opportunity to communicate affection seems to be base in sentient life.

Taking a cue from our adorable animal cohabitants, at face value it would appear that a hug is communicating the transmission of appreciation to the receiving party.

That said, the transmission is in most cases bidirectional leaving both parties feeling better for the experience. So if we position that thought as a hug being the communication that enables nonverbal transmission of affection, it begins to explain the relevance to us as a species.

Hugs communicate friendship, warmth, appreciation, pride, and tenderness. They can be congratulatory just as easily as they can be offering reconciliation or condolences. They exhibit camaraderie as well as good sportsmanship.

When two beings hug, their hearts come into close proximity to one another. I have often wondered whether on a much deeper level, the hearts are communicating on an entirely different basis during a hug.

Some people really know how to hug and to communicate. Others, not so much.  In my lifetime, the frequency of getting a hug from another man escalated dramatically from the way it used to be when I was a little boy.  At first I saw that as a derivation of societal norm, as if society were finally becoming a bit more relaxed about homophobic fears. But actually, I think that men feel every bit the desire to communicate that warmth and appreciation that is expressed in a hug. Hugging a good friend hello or goodbye is one of life‘s great joys.

Hugs were plentiful in my home growing up. Even though I grew up in a broken household, living with single parents (which was far more uncommon back then) I never felt any shortage of hugs and affection from either of my parents.

For me, one of the only values I find in Facebook is an occasional post of something that is so beautiful that it gives me pause. I saw a post a couple weeks ago about a pair of penguins down in Australia who were both the surviving member of their respective relationships. Both had lost their spouse. And the photograph was the two of them looking at the lights in the harbor and one penguin had its arm around the other and it was just charming. Sometimes it is the little details that take our breath away. I hope some of what I share today is able to do the same for you.

Coming back to the aphorism of the day, it doesn’t matter what I say on the subject of a hug, none of the words that I could possibly leverage would ever have the same impact on your being as seeing these pictures, or even more importantly, hugging or being hugged by someone you care about.