Remember to not only say the right thing in the right place, but far more difficult still, to leave unsaid the wrong thing, at the tempting moment. 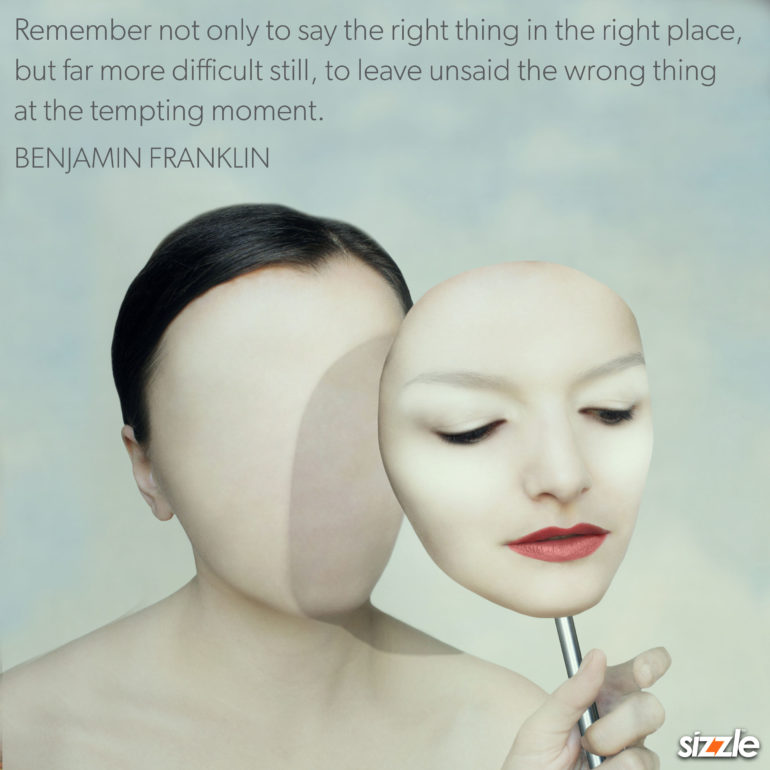 It screams out of your brain and runs at lightning pace to your mouth. You can taste it. You sense with all of your being that it must be said. NOW!

But the truth is… it should not be said. EVER!

Such is the balance of human emotion. In a breath, we can instantly wipe out all the good that has been accomplished for days, weeks, months or years prior, with one stupid utterance from our mouth. We can create a moment in a heartbeat that we could potentially regret for the rest of our entire lives.

So what is the gate keeper that teaches us when to keep our mouths shut?

Experience and mostly empirical knowledge. I think this is one of those life lessons that comes from experience, wisdom and the school of “Hard Knocks.”

So when I saw that Ben Franklin said this, I started to wonder how it played out in his world…

On June 10, 1752, Washington, Jefferson and Franklin are sitting in a pub in Philadelphia, taking shelter from the pounding electrical storm outside. It was a usual day of griping about the British and good-natured overall banter, when Ben starts his regular routine about how he wished there was a good game on TV (no sports bars yet) and wants to capture the lightning outside and put it in a bottle so he could broadcast the basketball games that had not yet been invented. Washington, having heard this story, one too many times, says… “Oh my God, not this tired crap again, Ben!” Ben gets upset (because he’s had one too many) and opens his mouth and says something incredibly rude to Washington, who gets incensed and tells Ben to “Go fly a kite!” Now, Ben (on a roll) jumps to his feet, knocking over the chair beneath him and says the immortal words…. F you George! (Explicative deleted, explicative deleted, explicative deleted) This was the part he wished he had not said to George that day.)

Then he stormed out of the tavern, grabbed his son, Will, (who was pissed he had to go out into the rain with his crazy ass dad, to fly this stupid kite with a key attached in an electrical storm)  and discovered electricity. (Contrary to historical research, Franklin did not invent the sports bar, however, which in retrospect, given that Chamberlain, Erving and Barkley would eventually turn up in Philadelphia, might have been a wise invention to have followed up on).

Later, once sober, Ben realized his moment of glory was overshadowed because he had to apologize to George and Tom and admit that he was a hothead and shouldn’t have called George names.  Fortunately for Ben, history has kindly omitted the explicatives from the history books.

But perhaps historians will not be as kind to us at our moments of frustration and anger. So we might be best served to heed the lesson from Ben about keeping our big mouths shut, and instead enjoy his discovery of electricity as you use it right this minute to read this aphorism and musing.