However many holy words you read, however many you speak, what good will they do you if you do not act upon them? 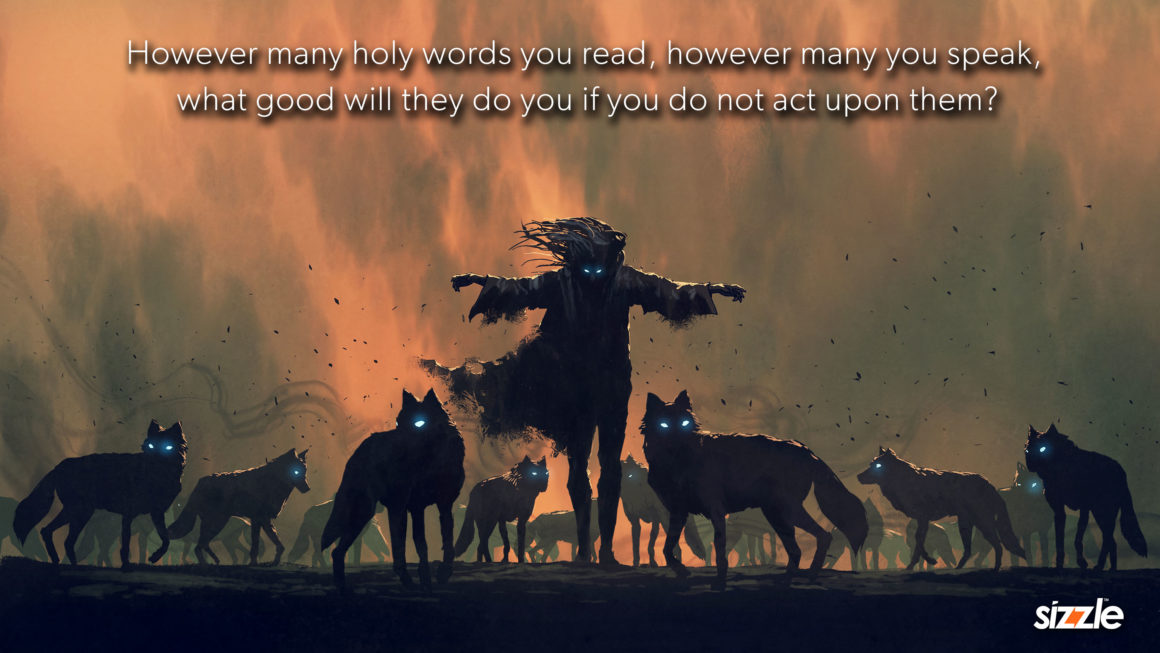 However many holy words you read, however many you speak, what good will they do you if you do not act upon them?

This has always been one of my pet peeves in life.

I went to bible study as a young boy. I studied for my bar mitzvah.  I spent several years of my life around people who valued the Bible and could quote sentiments and phrases from within. As I learned the lessons from the parables in the Bible, I was struck continuously by people who could quote a chapter and verse, but not actually implement that sentiment in real life.

At first, I thought it was an anomaly. But as I grew older, and saw more evidence of this not only within my own religion, but in others as well, it became apparent to me that this was more than an anomaly, it was a way of life. In studying filmmaking and watching how those sentiments were used to their greatest advantage, I realized it was not just my observation, it was clearly a norm. So by the time I saw The Godfather in the theater for the first time, it was very clear to me that there was an intentional “do as I say, not as I do” mindset.

That started my journey into alternate philosophy. I realized that it was not the passages in any religious text or book or torah that were problematic for me, it was the hypocrisy of some of the people who professed to believe in such high level beliefs and were not walking the walk that disturbed me.

If you have read any of my musings, I think you get a sense that I am working daily to absorb high level philosophy and share that with anyone who may listen. It is my own private experiment of working to change the world, one thought at a time. If I am taking the time to write about it and share it, I am spending equivalent time trying to live up to the standards that I profess. I make zero representation of being perfect in this regard. To the contrary, I am a continual work in progress. Some days are better than others, but, like everyone, I have my fallible moments in which I slip backwards and fail to live up the morals I profess to be opportune.

As a warning sign, any time I go to a first business meeting and the other party opts to share a lot of religious doctrine with me, my warning bells have been trained to go on instantly. This does not mean that what they are saying is offensive. To the contrary, many of the things they profess to believe in are very high level and worthy of respect and admiration. That said, it is has been a very consistent observation that those who are regularly invoking the name of the Lord in a business discussion, are statistically more likely not to live up to those religious doctrines. In fact, more often than not, they are much more likely to do exactly the opposite.

If you have played Monopoly, you will understand that when I hear those words come out of someone’s mouth for no apparent reason in a business discussion, it feels like they are waving a “Get out of jail free” card at me. I start to cringe inside and wonder when the other proverbial shoe is going to drop.

To ensure I am not offending anyone who has deep-seated religious beliefs, I want to be very clear here. I respect you and your belief and if you are living up to that belief in a morally responsible way, I admire you even further. You are the reason why higher level beliefs exist. You are on a path to an elevated state of existence and I applaud your pursuit of such with everything I have got.

My grievance is with the ones who use all of the phrases and nomenclature to garner respect from people who follow such a belief system but do not actually practice what they are speaking of. And the ones who use it as a disguise so that they may victimize other human beings as a result of their belief (or feigned belief) and leverage those holy words as weapons to hurt others are clearly a danger to the rest of society because they are operating on two levels, just like a wolf in sheep’s clothing. At that point, they are no more holy than Michael Corleone being asked, “Do you renounce Satan?” To which Michael replies, “I do.”