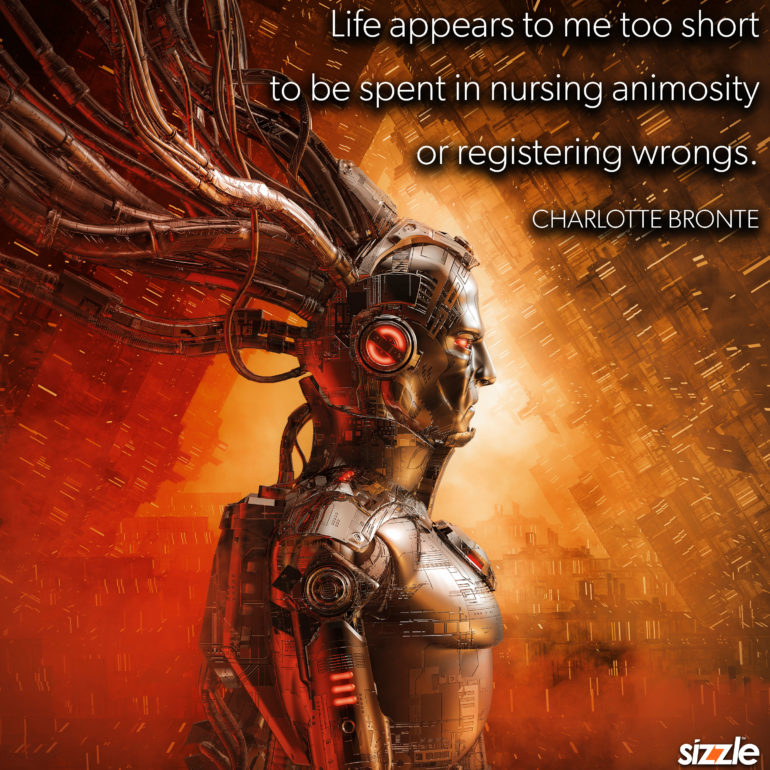 Have you ever taken inventory of how much energy you consume on a weekly basis holding any kind of animosity towards another human being? Or another system? Or an institution or company?

The expenditure of needless thought on things that have transpired or are about to transpire, are measured in the universal balance of things against what those same thoughts and efforts would generate, were they focused on something positive instead of fretting over something negative.

Many of these great lessons trace back to Buddha who I am sure learned them from somebody before him, because they are inherently true.

“ Holding on to anger is like grasping a hot coal with the intent of throwing it at someone else; you are the one who gets burned.”

The prospect of registering a wrong connotes some sort of an act of vengeance or similar. We have had a couple of unsavory people pass through our world of Illusion Factory and Sizzle over the years. I would be lying if I told you that I was mature enough to act with the same diplomacy and reserved nature as I am sharing this morning. I have the mind of a creative filmmaker, do you think that acts of vindiction are unknown to me? I have conjured some truly remarkable solutions to that. Acts of revenge that would leave the other party a permanent memory of why they should not have done this to me and my friends! 🤬🤬🤬

BUT……. I have never once acted on any one of them. And truth be told, I am personally very proud of that restraint. I may have let that person know that we were displeased with their choice of behavior and conduct. I feel that at a minimum that is required in most cases. Of course, if you are a victim like the ones that Cosby and Weinstein left in their wake, then obviously there must be a repercussion. That said, in some cases, tis best to let the sleeping lion lie. This does not preclude thoughts of having two dump trucks of sand dumped in front of their garage door so they cannot open their garage door to get their car out in the morning or the giant open Super Bowl party announcement all over social media with their address on Super Bowl Sunday and other equally imaginative and probably far more damaging acts of stupidity.

So I leverage my imagination as the equalizing variable to my ego. My ego wants blood. My brain wants sanity and profitability and tranquility. So my imagination conjures several enjoyable scenarios and in my mind’s eye I get to experience the imaginary wrath I look to impose upon these parties. And then, I just let it go. And I do my best every day to reduce the internal angst surrounding the incident that they caused me or my team and allow it to wane. Eventually when I look back on the circumstance, I get to reflect on both what they did as well as what I, in my merciful self control did to save them from what my ego would have willingly done to them.

And the truth be told, the further you get away from that moment of anger, the greater you feel having taken the path I have just described. You have not added any further aggressive variable to something that was already problematic, you have not made an enemy even more willing to hurt you, and, most importantly you are free to continue to pursue what you were pursuing, unencumbered by any irrational variable that you have unwittingly unleashed in your moment of anger. You truly can destroy almost anything with a single sentence. So learning to keep your mouth shut, is imperative.

This is such an easy concept to grasp, but incredibly difficult (for me) to regularly adhere to without continuous self-discipline.

As a final note for this beautiful Saturday morning, my personal therapy for driving the aggression that these things accumulate in my internal being is to stomp up the mountain I love in Westlake in the darkness in order that I might watch the sunrise at the top. I can truly share that there is a great release of aggression by stomping up a mountain and…. I am always a different person  when I walk down. I can’t explain it but I know it to be absolutely true. Wishing you a wonderful weekend!