A person reveals their character by nothing so clearly as the joke they resent. 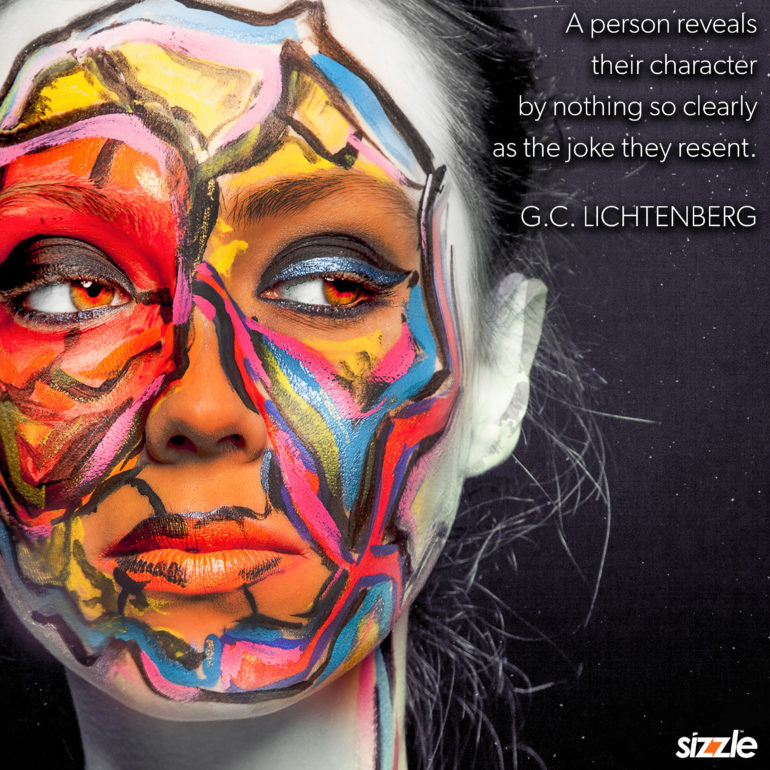 What is funny? We laugh at so many things. And yet so many of them have nothing to do with each other, nor are they even the same kind of humor.

Comedy comes in so many flavors: physical, political, dark, one liners, stand up, situation, romantic, intellectual and so much more. There are more flavors of comedy then there are flavors of ice cream at Baskin Robbins.

Why do we laugh when we see someone take a slip and fall in a video or movie? If that were happening to us, we would not be laughing. Even when we try and rationalize this particular kind of humor, it doesn’t rationalize well and yet people have been laughing at “physical comedy” probably since the beginning of time… before there were even words.

Research has proven that people are not laughing at the fall, they are laughing at what somebody is doing to prevent themselves from falling as they are falling. Charlie Chaplin and Buster Keaton and the comics of the silent era mastered that.

So when somebody finds a particular form of comedy offensive, they are creating a revelation into a deeper part of their internal being.

The juxtaposition between the two creates huge territory for comedic pleasure. As certain people with specific morality journey into that territory, their negative perspective towards any specified group in the world starts to demonstrate the negative bias towards that group which, then of course, becomes potentially offensive to someone in that group. I find it interesting, however, that if someone in the group that is being made fun of in the joke is telling the joke, suddenly the joke becomes more of an insider opportunity to laugh at ourselves. The negative stigma of being insulting to a specific nationality is replaced by a communal laugh at our collective community.

If Woody Allen creates humor around a totally dysfunctional Jewish family, the Jewish audience laughs at that comedy out of identification with some of the characters in the scenario. Dave Chapelle, Richard Pryor and Chris Rock can do 90 minutes on stage and use the N word 100 times and we all laugh throughout the routine as if it were no big deal. But if Woody Allen got on stage and did an hour of the same material using the same N word, it would be branded as racist. Even if it was the exact same routine.

This leads me to believe that comedy is a selective release that we treat ourselves to in moments of proper stimulation. Sometimes laughter is so spontaneous there is really zero filter. You see something that is funny and you instantly laugh without any second thought. People find amusement in the misfortunes of others, in expressions of otherwise forbidden emotions, in juxtaposition of incompatible concepts and in realizing that certain expectations have been violated.

Trevor Noah says, “If you laugh with somebody, then you know you share something.”

But, have you ever been there when the comedy is not working? When I was very new in the entertainment business, I had one of my main clients who would always call his executive secretary into the room to tell an off-color joke that would make me want to crawl under the table. It was just an ugly moment and it ultimately rewarded him with more than six sexual discrimination lawsuits.

During this highly divisive political era we are transversing, no doubt you have seen comedy from the other side that you find offensive. I believe this is the essence of today’s aphorism. Sometimes comedy is used with a bully mentality. And when someone’s morality is offended by the use of someone else’s comedy, usually that comedy is being leveraged as ammunition with intent to inflict pain on the beings that are the butt of the joke.

So I find it interesting to watch how certain comedy connects and how other comedy falls flat on its face. Discovering what we find funny in our own world ought to teach us quite a bit about ourselves.