You are so much more than someone’s second choice, an afterthought when things change. You deserve to be the first person they think of, no matter the moment or who is in front of them. If you are truly important to someone, you will always be their first choice. Just as they are yours. 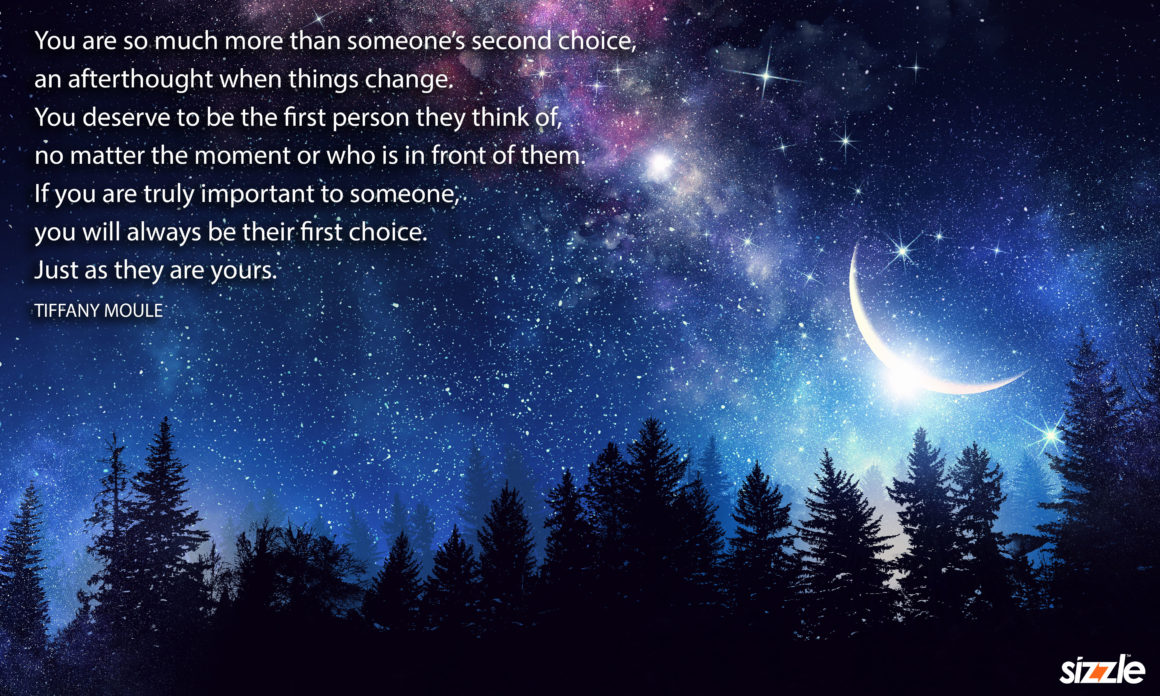 You are so much more than someone’s second choice, an afterthought when things change. You deserve to be the first person they think of, no matter the moment or who is in front of them. If you are truly important to someone, you will always be their first choice. Just as they are yours.

I was talking with a friend who is dating in the online space. She was expressing to me how interested she was in this one person, but there were complications in his world that made him ask her to standby while he sorted his mind out.  I listened politely as she was explaining her logic to me. He had a very impressive career, and was no doubt handsome and a healthy bank account. But the one part I couldn’t get past was the fact that he was asking her to wait for him while he’s sorted out his feelings with the woman he is currently dating.

So I called her on this perspective. And I inquired why she would be interested in standing by if he is dating somebody else. Her response was a defensive stream of excuses. I have had this aphorism in my collection of thoughts for well over a year now. I have never written on this topic, but my conversation with her stimulated my desire to do so.

I am certainly not a neophyte in the online dating space. I have had more than my ample share of experiences.

Perhaps it is my own ego that gets in my way, but from my perspective, if somebody is in a current relationship, I have zero interest. I don’t care what excuses they might express as for why they are still in that relationship but are expecting to be free soon. If they are in a relationship of any kind, they have no business being out with me for any reason whatsoever. That shows a character trait that I don’t respect and my interest in that person is instantly nil. If anything, I would be pissed off that they chose to meet me without having expressed that in advance. In online dating, you might meet one person one night and another two nights later. That is different than when they are seeing someone regularly (intimately) and still dating (to see what’s out there).

So, as a good friend I chose to share my sentiments with her, in the event that perhaps my vision would enable her to find the self-respect to walk away. The response that I got was not what I had expected. I sensed my friend getting very defensive with me and irritated that I could not see that this relationship she was pining for was almost ready to hatch (her words not mine). So I stopped counseling at that point. I realized that what she wanted was validation of her choice, not an opposing perspective that clouded her feelings of opportunity that she sensed was around the corner. I guess when they become a couple, I’m not going to get invited to dinner!! But then, us single guys are never invited out with couples anyway, so no great loss!

I don’t talk much about dating in my writing, I’m very private about that part of my life. But I have a very strong moral code and that code starts with: I am number one on my priority list. I am not looking to supplant someone else’s life, nor am I expecting them to do the same for me. I believe a great relationship has a very clear balance of power in which neither party has any power on the other. A great relationship stems from two people who really want to be with each other and spend time with one another in order that they become best friends. Staying single through the holidays has always been a challenge, you see everybody you know going on vacations and going to family gatherings and you work to console yourself that there are choices that you have made that have enabled you to be in this place.

Regardless of any self exploration or self consolation, the reality is that the experience of dating changes considerably over the course of your life. To my original point, waiting around for another person to figure out where they are in an existing relationship, is a total waste of your time. If somebody is not emotionally available, their ability to be dating is disingenuous at best. Bonding with the wrong person in a moment of loneliness is a losing proposition, one that I am not likely to ever make again.

When I changed my perspective on dating to allowing for the opportunity that a non-romantic relationship could spring out of the connection, I have met some amazing friends, some of which are receiving my writings in the morning. That perspective really improved my vision in the dating experience because it gave me opportunity to have an alternate outcome rather than a romantic opportunity…. yes or no. As a result, I have made some very deep friendships with people I would never have met, some have turned into professional collaboration and others turn me into a willing ear, listening to stories about some great guy who is almost perfect and in a short period of time will be just what they are looking for (assuming he doesn’t stay with the person he is currently dating).

Life is short, relationships are intricate and finding your own self respect that precludes you from hanging out waiting for somebody to have time to connect with you when their personal life dictates…. is just part of the game. Even if it means you don’t end up with that person, there’s probably a really good reason that you are not.