I still get rejections – frequently – and my goal isn’t to never fail, to never be turned down, but simply to succeed more often than I don’t. And in order to do that, I have to constantly put myself out there, to judgment, critique, and rejection. 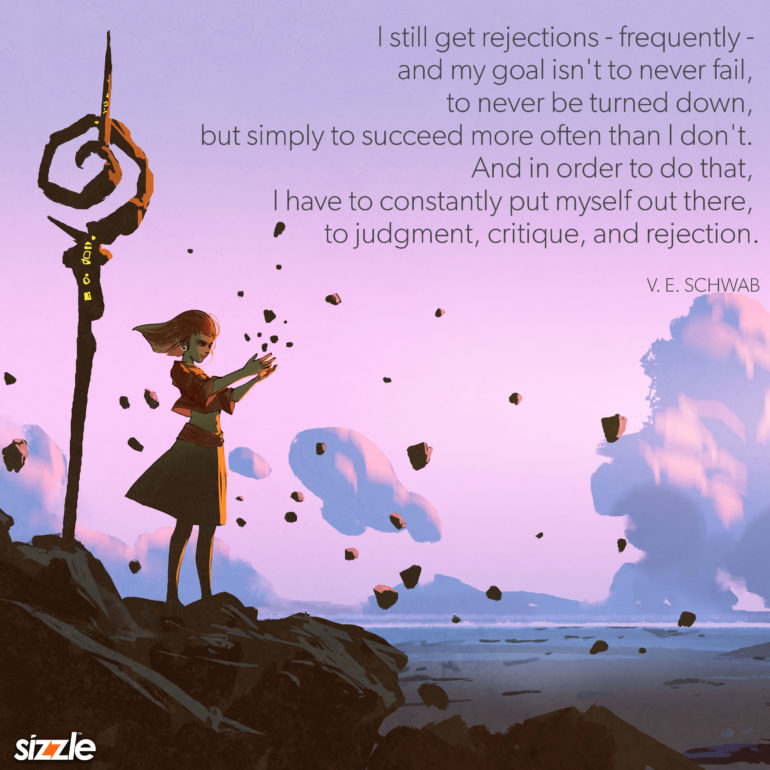 Putting oneself out there to judgment, critique and rejection is one of the more maturing processes one can ever attempt. It requires courage of an unparalleled magnitude. It creates an inescapable insecurity that haunts you from the moment you mentally commit to whatever it is that you are going to do, all the way through the process and long after. It can be debilitating, generate huge insecurity, bore holes in one’s stomach lining and position any one of us in a narrow chasm that feels both imprisoning and limiting.

If you doubt this, consider…..Have you ever viewed a movie that you adored but the person you went with was left nonplussed? Did the fact that your experience was so amazing in that theater make your colleague’s experience any better? And did their lack of enthusiasm for that movie make it any less enjoyable for you?

Life is clearly Baskin Robbins. There is no right answer. There is no single solution. I have shared my weakness for Pistachio Almond ice cream and when I order it, and my friend goes for one of those horrible gummy worm ice creams, it does not make them wrong, even if I wince and wonder why that is pleasurable.

So, taking that back to putting oneself out there on the front line, subject to judgment and rejection, I would propose that the very best thing we may ever do is to give those opportunities our absolute supreme effort and then accept that as what is. The person who dreams up those gummy worm ice creams is not going home feeling bummed that I will never ever make that my choice when there are 30 other options at Baskin Robbins. They made a kick ass flavor of ice cream (as per some patrons) and that is a great thing.

I know the metaphor I am using seems shallow and not as pertinent as it might. But I would argue that it is actually spot on. For example, The Illusion Factory has been in the creativity for hire mode for 42 years. My team and I would conjure countless concepts for a movie poster, logo, package design, trailer, magazine ad, web design, app concept, game concept and more. Only one of the ideas we propose will ultimately be chosen. The others are all rejected. And in many cases, the best ideas (in my opinion) were left behind in favor of a concept that shows something that the decision maker deemed most important to represent in their project. They do not care that we have won 265 of the top creative and technical awards for our decision making processes. They only care that they want their (gummy worm ice cream equivalent) and, as they are the paying client, their decision is final (after one last persuasion pitch from me to choose an alternate) and then… That is that. Period. Let it go. Move on.

As an artist that is hard. You put your soul into dreaming up ideas, contemplating the needs, variables, consumer opinions, market research, etc. And if you want to turn in something artistic and hope that it will sell, make it… by all means. BUT>>>>> be prepared for the client to go in another direction. The poster for Schindler’s List was a prime example for us. If you remember, it was a close up of Schindler’s hand, holding the girl’s hand with the red coat, and the names of the people he saved atop the poster like a wallpaper. Brilliant. Amazing work. I bought the poster and put it on the wall because I liked the art and idea so much.

But does that mean that the next movie we are trying to sell will allow a creative exploration? Of course not. Schindler’s List was a Spielberg film, and they had a built in audience. Most posters want two faces in the sky and an action scene below, and after doing thousands of those executions, we were just burned out on that as an art form.

My reaction to all of my artists whose hearts I would hurt when I came back from the meeting with the client was always the same… we are art for hire. When we want to make fine art, it is ours to produce to whatever element of satisfaction and perfection, we desire. But, when we are working for the client and they have millions of dollars on the line, they want those stars’ faces in the sky so the public knows who is in the film and will gravitate. It is just marketing.

I close with this thought…. Whether you are putting yourself out there as an artist, or any other walk in life, do it with everything you’ve got. Leave not a single morsel of substance out of your effort. Believe in yourself and who you are and what you do, no matter what. Because without exception, the rejections are coming. For certain. And when they do, you have two options…. Take them personally and get depressed (normal reaction, I still feel this, regardless of what I espouse herein), or look at them and realize that they are the person who is eating the gummy worm ice cream and if you had given whatever it was that you were doing that caused them to reject you… you probably would have never dreamed up gummy worm ice cream anyway, so let them gorge on that, and you continue down your path seeking the ones who are looking for the unique talents that you alone, possess.

There really is no other viable solution that I have encountered, shy of getting timid and not putting yourself out there. And that, is the ultimate failure. Letting your fear better you in the moments that count.