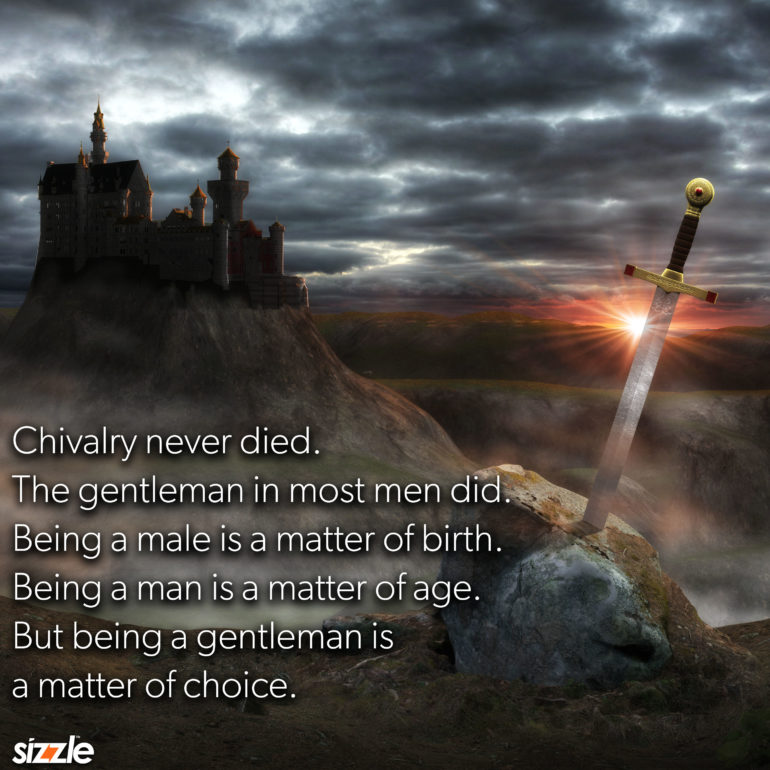 Chivalry: the medieval knightly system with its religious, moral, and social code.
• the combination of qualities expected of an ideal knight, especially courage, honor, courtesy, justice, and a readiness to help the weak.

Even though DC comics and Marvel and a host of others were around when I was a child, my superheroes were King Arthur and the Knights of the Roundtable. I would read the stories and imagine the bravery and heroism required to be in that circle.

It is not that I did not enjoy Batman, Superman, Spider-Man, et. all, for I enjoyed them greatly, but they were fantasy and King Arthur and the Knights struck me as being real. It was here that I was introduced to the concept of chivalry. My father had been role modeling such all my life but I wasn’t clued into it at that young age.

I remember there was no misogynist qualities in those books and the knights were always acting as gentleman with regard to the ladies.

I looked up chivalry when I was spending my evenings after Hebrew school reading in the Woodland Hills library, waiting for my father to pick me up after work. The code for chivalry exceeded the male female relationship and extended to the expected behavior that a knight must follow as part of his oath to God.

As a 12-year-old, the character of a chivalrous knight standing by to defend the weak was heavily impressed upon me. Were these not truly living superheroes who embodied every quality that we placed upon Superman?

By the time I was 14, women had elevated in their priority in my mind, for obvious reasons. In other forms of literature, a chivalrous man did certain things that demonstrated his chivalry, among which were holding a door for a lady to pass through, helping an elderly woman across the street, holding a chair for a lady to sit and walking on the outside of the sidewalk. I did not understand the part about walking on the outside of the sidewalk until I learned about how chamber pots were dumped out of the windows onto the street and if a man were walking on the outside, he was most likely to have it dumped on him. I didn’t like that idea very much, but toilets had been invented by then, so it was really immaterial.

Six years later, I was starting my business and as I went out into the professional world, the misogyny was rampant. Just watch an episode of Mad Men if you don’t understand what I’m talking about. I would watch these men who seemed so “out of code” with chivalrous behavior and I wondered how things had changed so much over several hundred years. Did these men not grow up reading about King Arthur? Why did they consider these behaviors acceptable?

Unlike any of the Knights of the Roundtable, I did not pledge in oath to God to be chivalrous. I only had made a moral note in my own internal being that that quality of conduct was how I wished to live my life.

(it’s funny, twice as I have been writing this, I have walked out into the street to allow a passing female jogger to have the path unencumbered. These behaviors are so ingrained in me, I just don’t notice them any longer.)

I had no glistening suit of armor nor a valiant steed, not even a a lance or broadsword. Armed with my Firebird and a Canon A1 camera, I set out into the world on my quest with not even a holy grail to motivate me.

Yet, somewhere deep inside, the motivation to be one of those valiant knights in shining armor shown deep within me.

The older I got, the more I saw the variables that precluded men from behaving with this degree of morality. I have written extensively about many of those causes, reasons and disparate belief systems.

Honor and respect are two of the things in life that cannot be purchased, nor can they be commanded, nor can they be demanded. They can only be earned. They are achieved through good deeds and valor. It is a true code that must be understood and worked for on a daily basis.

When I walk through a door in a public facility, I am always the one who is holding the door for all men, women and children who are passing in my immediate presence.

None of this is shared to extol my own personal virtues, but rather to share a reminder of a long established code of ethics that I firmly believe has every cause and every need to exist in our contemporary society as it did back then.

Chivalry is not dead. It just needs to be taught with the same degree of importance as many of life‘s most important topics.