I have nothing to ask but that you would remove to the other side, that you may not, by intercepting the sunshine, take from me what you cannot give. 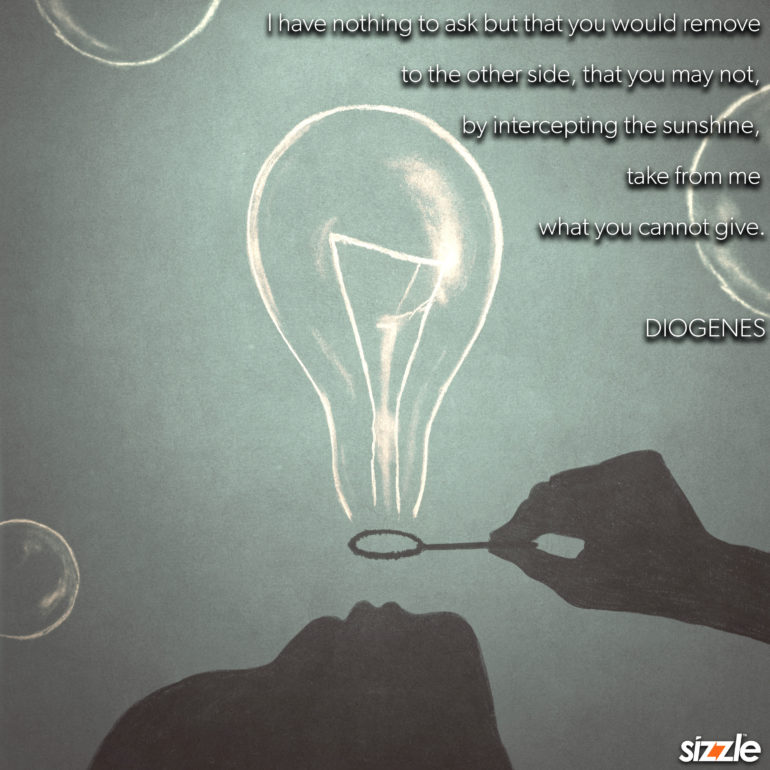 What is the difference between a naysayer and someone who is trying to give you advice you desperately need?

I would have to believe that the distinction is perceptual at best, and a blurred line in most cases where we are not talking about a black and white topic where there is only a right or wrong option, like being an alcoholic for example.

When you pursue a vision, it is the guiding light. You can see, taste, smell, touch and hear it with every ounce of your being. And it propels you into actions, behaviors, interactions and forces you to continually make choices.

From the outside looking in, much of what a visionary is doing appears random, missing focus, and appears to be a distracted series of interactions that lack focus.

That is what it feels like on the inside as well. Being a visionary is not a linear experience. It is more akin to being in a world of dots. Every day, you get a glimpse of how another two or three of them connect. You note this and try it, and keep navigating through the dots, looking for others which seem likely to pair.

In studying da Vinci and looking at length at his notebooks, I found a validation in my behavior. Until I had studied him, I thought perhaps I was ADHD or similar, and perhaps I am, but in seeing his disjointed collection of notes on the same page, I had to conclude that either paper supply was short, or his brain was like a pinball, bouncing off the walls and flippers with every stimuli that could enter his mind and rapidly writing it down before it disappeared.

That is what it feels like to be in the world of dots. Suddenly you get a glimpse of an innovation, a view of the future, or a connection between a technology and a methodology or a problem in the marketplace and that is the proverbial “lightbulb” moment.  That is the moment where you see it. The vision. And so you continue.

To Diogenes’ point, when you are in that frame of reference, the very last thing you need is someone standing in-between you and the proverbial sun. Reducing your luminance, and restricting your vision to whatever their lack of vision wishes to impose upon you.

Sometimes this is coming from someone who is small-minded and less capable of seeing what you see. Other times, it is a person who feels jealous or threatened by your pursuits or success.

And other times… the person is right and you are delusional and they are trying to snap you out of it.

Trying to distinguish between these while navigating your own personal behavior in a way that is viable and functional in life is a delicate task. We all steadfastly believe we are correct. That is natural. But trying to be aware enough to recognize the moments where clearly we are incorrect is the more delicate ballet. And therein lies the conundrum.

When someone is blocking your luminance, find a way back into the light. Always. But when they are calling your attention to shortcomings or misperceived variables, we are most wise to attentively listen to their perspective, for as long as is required to do a self check and determine whether or not there is validity in what they have opted to share.

Diogenes, also known as Diogenes the Cynic, was a Greek philosopher and one of the founders of Cynic philosophy. He was born in Sinope, an Ionian colony on the Black Sea coast of modern-day Turkey, in 412 or 404 BC and died at Corinth in 323 BC. Diogenes was a controversial figure.