It often requires more courage to dare to do right, than to fear to do wrong. 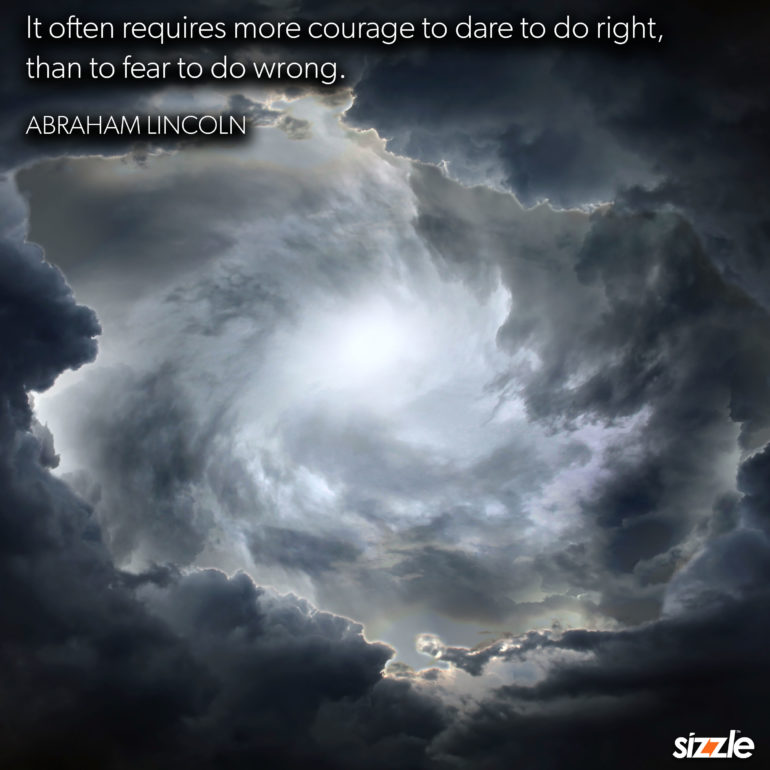 Knowing that something is the right thing to do, in the face of hugely unpopular public perception, is an eventuality that not only faces all politicians, it also impacts each of us in the smallest of circumstances.

When Lincoln was elected, he was not a strong abolitionist. His wife was more inclined in that direction, though a majority of her family was siding on the side of the South. The moral quandaries that he faced in taking office with the country fracturing and the seceding states starting their process of raising a militia and readying for battle are more than almost any world leader has tried to solve.

Yet, in his firm determination to hold the Union together at all costs, he was steadfast in his perspective that the laws of the Constitution of the United States must be observed and upheld, as was the oath he swore when taking the office of President of the United States.

With far more pressure on him to acquiesce to the South and allow their continued economy of slavery to prevail, he saw that the long term options he was facing necessitated the objectives of abolishing slavery and setting our nation on a new course of action. A decision whose impact is still reverberating more than 145 years later.

When we are confronted in our daily lives with decisions that have a moral quandary attached, we are instantly positioned at a crossroad in which our options are significantly impacted by a choice between doing the right thing or doing the popular thing.

In that moment, I believe we explore both sides of our personality. One side knows very clearly what is the right thing to do. There may be a moral issue, or legal issue or ethical issue at hand. Those kinds of issues usually have a right and a wrong component.

But in that moment, the fear of doing the wrong thing suddenly rears its ugly head and looms over us like a black cloud trying to obliterate the sunshine. In our heart, we know the right thing is what we want to do but in our gut, lies that impending fear that if you make the wrong choice, the repercussions are going to be severe.

These events happen in personal decisions that only affect ourselves, and continue up the decision chain to interpersonal relationships, group dynamics and of course, as with Lincoln, continue in their progression all the way to the top of the World Stage.

I do not believe there is always a clear and cut decision. I think each circumstance enables us to find our way to wrestle with the internal quandary. I personally try my very best to make these decisions to make only one person happy with me.  My reflection in the mirror. If I can look myself in the eye, and know I did the right thing, regardless of how unpopular that choice was, then I know I am on the road I want to be on, regardless of outcome. I do not think it is always the easy option. But I have found it is the only option that I am able to live with on a day by day basis.

I am currently waiting in line for Shot #2. Happy Friday!!!